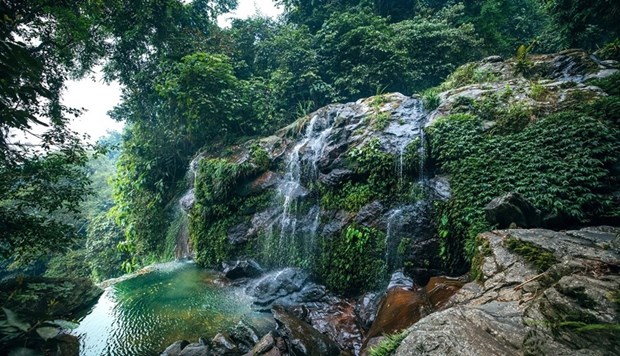 Trekking, climbing the waterfall during the time the air is full of humidity or it is about to rain makes visitors’ experience more interesting. (Photo: vnexpress.net)

Hanoi (VNA) – The green canopy in the Ba Vi National Park, which is just an hour and a half of driving away from Hanoi city centre, can make you feel like in another world. That makes Ba Vi a wonderful option for a short retreat from the busy city.

On a total area of over 10,000ha, Ba Vi National Park, which is 60km to the west of Hanoi, has everything to offer – amazing biodiversity, luxurious and eco-friendly tourist resorts, as well as a selection of mysterious French architecture.

It is centered around a three-peaked mountain jutting steeply out of the landscape: the highest – Emperor Peak at 1,296m, followed by Tan Vien at 1,226m and Ngoc Hoa at 1,131m.

Trekkers can discover various routes through the forests. The route from Cote 600 to Cote 700 of Ngoc Hoa Mountain, a part of Ba Vi mountain range, is a popular one which is only 5km long and suitable for most tourists.

The temperature on the mountain here is about five degrees lower than at the foot of the mountain. The trees like araceae, banana and ferns are much bigger in the forest. The rustling sound of leaves in the breeze and melodious sounds of birds create a peaceful rhythm.

The scenes change continuously along the route. After giant pine trees comes  a forest of bamboo and other members of its genus.

At the end of the awesome trekking trail, the spectacular view from Ngoc Hoa Peak is a worthy reward.

Wild sunflowers, or da quy, are everywhere. If tourists visit during the blossom season in November, they will have excellent photos.

As the “green lung of Hanoi,” the region is both an ecological wonderland and gateway to the past.  While a little chilly in the winter months, Ba Vi remains a popular year-round destination for Hanoians seeking a nearby mountain retreat. There’s a wide range of destinations to choose from. An example is the Cactus Garden or Cactus Greenhouse, which has more than 1,200 different species of cacti, from small, lovely types to thorny, giant cactus types.

The Pine Hill, located on cote 400, following the road from the gate to about 500m, houses a pine forest which is reall peaceful and cool. This is a great camping getaway after a long day trekking.

There are also historical sites from the French colonisation such as a political prison, a summer camp, a military zone; and cultural sites such as Temple President Ho Chi Minh, Upper Temple, The Old Church.

The old church is located at an altitude of 800m, in the middle of the old forest canopy. Ba Vi mountain was previously chosen as a resort area by the French, so there are many remnants of the French era,. Among them, the old church more popular and now accessible for tourists. Although the interior was almost destroyed, the church frame still retains its basic shape. The walls of moss and branches have crept along, creating a mystery for the ancient church.

Thuong Temple, also known as the Main Palace of the Shrine, is the place to worship the Holy Mount Tan Vien. The temple is located at the top of Ba Vi mountain at an altitude of 1,227 m, After climbing about 500 steps, the spectacle above will not disappoint you. The green of the mountains and forests mixed with the blue of the sky, the colors of the rivers and lakes were hidden behind the white clouds.

You can also visit Tien Sa Lake for some fun and vibrant activities./.